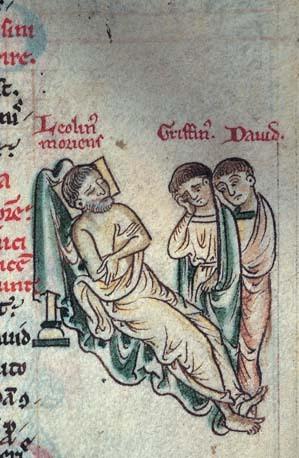 Gruffudd was born to the royal princes of Gwynedd, but as an illegitimate son, he would see his inheritance snatched away. But, although he would never be Prince of Wales himself, his legacy lies in his son.

Details about Gruffudd’s early life are missing from history. We know that his mother was Tangwystl (b c1182), the daughter of Llywarch Goch Lord of Rhos. It is possibly that she had as many as five children[i]  with Gruffudd’s father Llywelyn ap Iorwerth, Prince of Gwynedd, despite never marrying him. At least one of his sisters, Gwladus Ddu[ii], is thought to have been older than him and it is likely that he was the youngest of the children born sometime between 1195 and 1205. His mother is recorded as dying from a fall during pregnancy that caused a fatal bleed whilst other historians have concluded that Tangwystl died in childbirth.

For the first few years of Gruffudd’s life, his illegitimacy remained irrelevant. The principles of primogeniture were still forming in Welsh law and Gruffudd was fully entitled to be his father’s heir, even if further, legitimate children were born. This came a step closer in 1206 when Llywelyn married Joan, the illegitimate daughter of King John of England, but it is likely that there were still no children in 1211 when Gruffudd was accepted by the English to act as hostage to ensure Llywelyn’s good behaviour.

Gruffudd remained in England until freed under the terms of the Magna Carta in 1215, by which time a legitimate son, Dafydd, had been born to his father and Joan. What the eldest boy made of it we cannot know, but by May 1220 it was clear that Gruffudd was no longer his father’s heir. Over the next nine years, Llywelyn continued to ensure that it was Dafydd that would succeed him, including having Joan declared legitimate in 1226 by Pope Honorius III and having the boy pay homage to King Henry III in London in 1229.

Gruffudd was not totally forgotten, but his life had now taken a very different turn. He was given lands in Meirionnydd and Ardudwy but after a quarrel with his father, during which war was only averted after clerical intervention, Llewelyn reversed the decision and removed them from him in 1221.

He made a good marriage to Senana ferch Caradog the daughter of the Lord of Anglesey, and their first child Margred was probably born around the same time as the loss of his lands. By 1223 he was entrusted by his father to lead an army against William Marshall, the English Earl of Pembroke, but their relationship had unravelled again by 1228 and, unable to accept his father’s plan for the succession, Gruffudd was imprisoned for six years.

Perhaps Llywelyn thought that the matter of the succession was settled when he released Gruffudd in 1234 and returned him to his lands, but Gruffudd remained popular with the Welsh lords who saw no reason to change Wales’ laws of succession and preferred the mab y Gymraes (the Welshwoman’s son) to the half-English Dafydd. When Llywelyn suffered a stroke in 1237 and was unable to rule, Dafydd saw his chance, stripping his brother of his lands and imprisoning him and his son Owain in Criccieth Castle[iii].

There was one last glimmer of hope for Gruffudd. Dafydd became Prince of Gwynedd in April 1240 but in August 1241 he was forced to submit to Henry III when, in a deal with Gruffudd’s supporters (including his wife who paid 600 marks and gave custody of her two youngest sons as surety), the English king invaded on Gruffudd’s behalf.

Or so they thought.

Henry immediately reneged on his deal and instead insisted that Gruffudd and his son be handed over to him. Gruffudd would never know freedom again. In August 1241 he and his three sons, Owain, Dafydd and Rhodri, were all taken to the Tower of London where Senana was allowed to visit. Only Llewelyn ap Gruffudd remained free. Henry’s intention was to use Gruffudd against Dafydd should the Prince of Gwynedd step out of line.

Gruffudd was treated well and provided with half a mark a day for his keep, but on 1 March 1244, after two-and-a-half years as a prisoner of the English king, he made an attempt to escape. How well thought out the plan was and how he intended to get back to Wales is unclear; unfortunately for Gruffudd he never made it further than the Tower. Using his bed linen as a rope he attempted to climb down from the top of the Tower, but it snapped under his weight and he fell, breaking his neck.

If his son Llewelyn ap Gruffudd held any grudges against his uncle Dafydd ap Llewelyn then he quickly put them aside. Gruffudd’s death left Henry III without a card to play and in 1245 Dafydd rose up against the English king with Llewelyn in support. Owain, the eldest son, was freed from the Tower but stayed in England, leaving Llewelyn to seize the throne when Dafydd died in 1246.

A hundred years earlier and Gruffudd would probably have become Prince of Gwynedd. It was his misfortune to have a half-English half-brother and a father who stuck doggedly to his decision to secure a political alliance with England. Gruffudd could have built himself a life under his brother’s rule, but it’s hard to settle for second best when you know what could have been.

[i] how many children Llywelyn had and with whom is still debated.

[ii] Gwladus Ddu is now thought to be the child of Joan and not Tangwystl.

[iii] There is still some doubt as to whether the imprisonment happened in 1239 or 1240.